This attractive small hill town is known to Italians as the birthplace of one the country's greatest poets, Giacomo Leopardi and has collected also the inheritance of the tenor Beniamino Gigli and the painter Lorenzo Lotto.

Near the cost of the Adriatic Sea, it's on the crest of a hill. In the 16th and 17th century one of the most important town in the Papal States, nowadays, however, it is remembered for its famous son, Leopardi.

posted by Staff Love Marche at 23:30 Links to this post

Suggested Itinerary: visit to the historical town centre of Recanati

The historical town centre of Recanati can be visited leaving from the settecentesco Palazzo Leopardi, native house of the poet Giacomo Leopardi, still inhabited today by its descendants and located in the historic square of “Sabato del villaggio" (Saturday of the village). The exposure of objects and manuscripts of the writer concurs to travel again over his life; the rich library of the father comprised of his formation. From here a marked distance leads to Monte Tabor, known as the hill of "l'Infinito" from which a charming panorama can be admired. 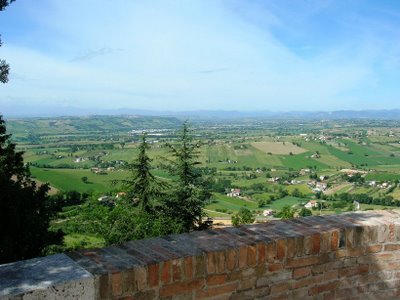 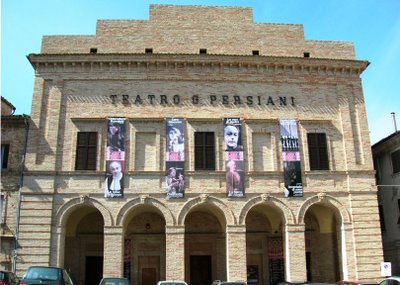 Once back to Palazzo Leopardi you can go up in via Roma, at the end of which you can come down through via Calcagni and via Cavour; along this road the St. Agostino's Church can be admired: its bell tower is the ancient tower sung in "Il passero solitario" poem. Continuing, on the left the Teatro Persiani, another of the Marche's unexpectedly grand 19th century theatres, with splendid newly restored interior and exterior can be visited. We then arrive in the nearby town centre, Piazza Leopardi, where behind the shoulders of the monument dedicated to the poet, the Palazzo Comunale (Municipality Palace) rises. The building accommodates the Beniamino Gigli Museum, other suggested visit: customs for the scene, photographies and objects of the great tenor born in Recanati are conserved here.

From Piazza Leopardi, which also shows the ancient Torre del borgo (Tower of the Village), we go through Corso Persiani, at the end of which via Falleroni on the left, leads to the Cattedrale di San Flaviano. Close to this cathedral, where the Museo Diocesano (diocesan museum) is located, you can find Villa Colloredo Mels, a splendid 18th century villa on the edge of town, center of the Pinacoteca Civica (The Civic Gallery), that within the prestigious collection of paintings of Lorenzo Lotto boasts the Annunciation. With a visit to these precious treasures our route is concluded.

For any suggestions please write a comment to this article.

We don't have sure news of the origin of the first inhabited center of Recanati. Surely the surrounding territories were already inhabited during prehistoric age by the population of the Piceni, which was diffuse in the region.
In roman age, along the river Potenza, then navigable, rose two important cities: “Potentia”, in correspondence of the estuary, and Helvia Recina, towards the inland. Because of the invasion of the Goti around the IV century a.d., the population tried shelter on the hills.
In the XII century, Recanati became free Comune (municipality) , originating from the union of the three castels of Monte Morello, Monte Volpino and Monte San Vito. The Republic of Recanati was insignita even of the title of “Justissima Civitas” from the Priors of the Comune of Florence, thanks to the importance of its statutes. In 1229, Recanati obtained from the emperor Federico II of Svevia the privilege to build up a port on the coast (Porto Recanati). In 1240, Pope Gregorio IX instituted the bishop's residence here.
In 1421, Pope Martino V proclamed in Recanati an important annual fair, which contributed in an important way to the economic development of the city, concurring to interlace diplomatic relations with the main Italian and European centers. Martino V also supported some cultural and artistic initiatives. In those years various literates reached the place, like the humanist Antonio Bonfini, giurists, like Antonio da Cannara, and notable painters, like Lorenzo Lotto, Guercino, Caravaggio, Sansovino, Vanvitelli.
In 1586, Pope Sisto V elevated to city rank the castle of Loreto built up around to the Church of Saint Maria, up to then territory of jurisdiction of Recanati. In 1798, the city endured the French occupation by the napoleoniche troops. In the same year, the city gave birth to its most illustrious fellow citizen: Giacomo Leopardi, son of conte the Monaldo Leopardi and marchesa Adelaide Antici. In 1860, the annexation of the State of the Church to the Reign of Italy, as a result of the battle of Castelfidardo, integrated the history of the Comune of Recanati to the history of Italy.
Nowadays the city is center of the Centro Mondiale della Poesia (World-wide Center of the Poetry). The 18th century Palazzo Leopardi, the native house of the poet, today inhabited by his descendants, is open to the public. It became restored in the present shape by the architect Carlo Orazio Leopardi towards the middle of XVIII century. The more evocative atmosphere is without a doubt the library, that guards beyond 20.000 volumes, between which incunaboli and antique volumes, collected from the father of the poet, Monaldo Leopardi.
For any suggestions please write a comment to this article.

posted by Staff Love Marche at 23:00 Links to this post